The Internet – A New Paradigm?

Given that the web-based delivery of geographical information carries a mix of advantages and disadvantages, what are its prospects overall? The internet in general has undoubtedly revolutionalised the ways in which people do business and undertake research or training. One of the unexpected consequences has been the creation of new “business models” based around online communities, ranging from mass online auctions and group buying to virtual discussions and E-democracy. Major growth of the web took place in the 90s which now links together diverse groups of individuals into online communities unconstrained by physical distance. So while the technology on which Web GIS runs has matured greatly, it is becoming evident that developing sophisticated interactive maps is only half the story. Given the high development and significant maintenance costs of web GIS, it is likely that only those sites that are able to serve the majority of needs of a clearly defined group will exist in the future. Increasingly spatial and non-spatial data used by decision-makers in government bodies are being made available to a wider set of stakeholders, including the general public. A nascent body of knowledge in “GIS for Public Participation” or GIS-P can be found on the internet, and such systems will often incorporate a web-based GIS. Furthermore, the development of an ‘open data’ movement in many countries (including the USA, Canada, the UK and Kenya, e.g. http://data.gov.uk/) provides an impetus for environmental bodies in government to release geospatial data in as raw a form as possible to the general public.

We can think of at least three ways in which the web is influencing environmental management:

Here, we will explore how environmental managers and GIS professionals use the web to provide wider public access to environmental data.

It is possible to identify at least four main components in an environmental online GIS.

Each of these has to be understood and optimised if the web GIS is to reach its full potential, and they are separately considered below.

A web-based GIS application still presents significant costs in terms of combined development and maintenance, although the per-use unit cost (cost of development divided by total number of users) may be relatively low. Unlike many other web applications, the most useful environmental web GIS will require data feeds from diverse organisations. To justify the costs, they must be able to identify a large or important community of stakeholders who will benefit from using the site – and who will bring direct or indirect benefit to the site’s sponsor. Political considerations may also be important in launching a project.

Consider the National Biodiversity Network Gateway – an application run by the National Biodiversity Network charitable trust, a non-profit organisation established by various conservation organisations. You can link to this via the references below. The starting point in designing a web application, or reviewing an existing application, is to assess the user communities: who would use the site, under what circumstances and for what purposes?

Geographical data lie at the heart of any GIS application. As users of web-based GIS, we are unlikely to have control over data selection or validation – but we can reasonably expect to be told how selection took place and what validation has been undertaken. As developers of systems, we need to win and deserve the confidence of our users that the data are fit for purpose (high quality). To do this, we must either ensure high absolute quality, or constrain the purpose (function) of the system so as not to exceed the capabilities of the available quality. The key in both cases is Metadata, which should provide a good indication of the currency, spatial coverage and accuracy of the datasets behind a web GIS, and perhaps even suggest what uses are and are not suitable with the available data.

We will use the example of the UK MAGIC web site. MAGIC (Multi-Agency Geographic Information for the Countryside) is a UK partnership project involving seven government organisations who have responsibilities for rural policy-making and management, and although it has been designed to meet the needs of the partner organisations, the facility is available to anyone over the Internet. The MAGIC partners are:

The approach to metadata that is used by this web application is exemplified below with reference to a data set for World Heritage Sites which forms part of the Rural Designations group of data sets in MAGIC: 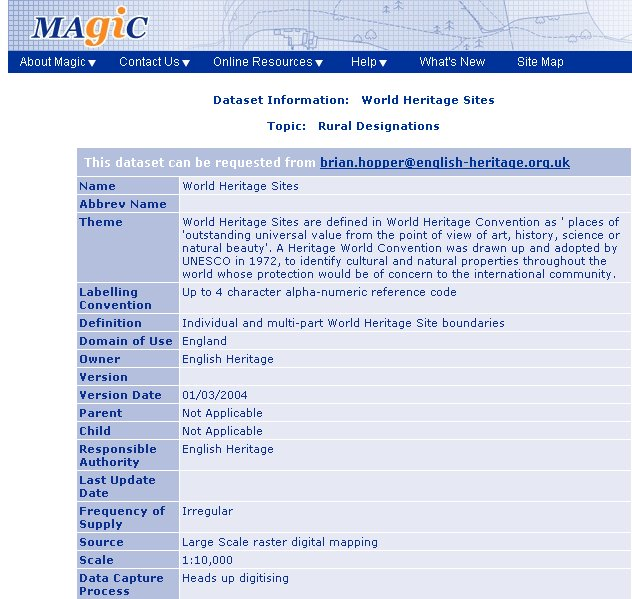 It seems self-evident that the function of a web-based GIS application will be clear to those who use it and to those who sponsor and design it. In practice, this is often not the case. It is certainly possible to provide a simple typology of functions, and it may be possible for the sponsor/designer to select from this list a subset of target functions, but in the end the users will always be tempted to omit some of the target functions and invent some of their own. The designer can guide users towards “appropriate” use, but the risk of unexpected and possibly inappropriate uses remains real and worrying.

Perhaps the greatest risk is that non-expert users will apply data in a way that is not supported by the data quality. This is a commonplace problem, and often produces nothing more than inconvenience – for example, if we used a 10-day weather forecast to make an important decision for an activity in the future without checking for shorter-term forecasts as the day approaches. Occasionally, misconceived use can be potentially more serious, as with using an indicative floodplain map (the example used in the MAGIC activity above) to decide on the flood risk experienced by a particular house without undertaking a more detailed background study. In this example, the site owner (the Environment Agency) has foreseen this problem and created a careful prior knowledge approach to maximise the chance that users are alert to the limitations of the data. 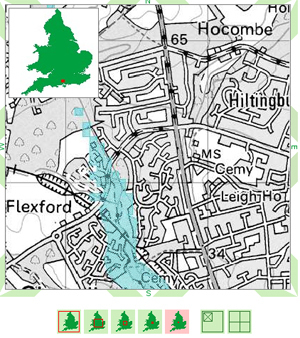 Figure 3: Screen shot of ‘What’s In Your Backyard’.

One of the benefits of Web-based GIS seems to be that they can simplify complex data and functions for the benefit of non-technical users. This has real advantages as long as the metadata are robust enough to avoid misleading or confusing the user. An excellent example is the “What’s In Your Backyard” site provided by the Environment Agency in England. This site is clearly designed to be understood by the non-technical user, although more detailed, scientific information is available when required.

This site enables homeowners and prospective buyers to gain access to information that has been available to estate agents for a number of years. The site offers a limited range of data, but a very user-friendly approach and a powerful set of metadata that make it clear how the information should be used.

The actual technology used to run and deliver the web-based GIS application will have a direct influence on the nature and quality of the user experience (where, again, the user might be the client sponsor organisation or the end-user who is accessing the system). As always, there are trade-offs between cost and performance, and these are exacerbated by the expectation held by many end users that web services should be free at the point of use. There are also trade-offs between the functionality of proprietary systems and the merits of open standards, but the balance of advantage and disadvantage here is evolving steadily. Examples of Web Mapping Servers being used to power web-based GIS are given in the table below.

Before using the site read the MAGIC project summary about the site (referenced above), and follow any links necessary to provide you with a general understanding of the site’s purpose and organisation.

What sort of potential end users would be targeted by a site such as this?

The meta-data are fairly technical here, and in broad terms, whilst the MAGIC site enables members of the public to map and engage with data via the 'interactive map' and 'static maps' options on the home page (which you may wish to explore also), the download facility here seems more targeted at professionals within the environmental sector.

Critically evaluate the ‘What’s In Your Backyard‘ site for usability. For example:

Yes although I couldn't get it to recognise my post code.

Yes, I liked the fact that you could click on all the squares of the scale bar to change the scale.

Layout very clear, its easy to see how to get it to do things. There is no ability to click layers on or off other than to turn all the layers on or off at the same time. This is good design for a site that is designed for the public.

In general the site is not complicated and there is no technical terminology, but a great deal of useful information is imparted through simple spatial search and overlay techniques. There is very clear online help and metadata explaining capabilities and constraints of the data sets currently being viewed - this is particularly effective with the Indicative floodplain maps, which are inherently sensitive in terms of their ability to affect people's property values and sense of security if misused.

Based on web-based GIS systems that you have used, which criteria would a web mapping server be judged on during the purchasing process within an organization?

Possible Criteria are: Performance (Roughly equivalent to the speed at which the map refreshes on screen), Reliability (does the system do what it says on the tin? Does it crash?), Scalability (can we expand the data it displays without rewriting the system completely), Cost (initial), Cost (Development), Costs (Maintenance), Interoperability with Open Standards (Can we import data produced by the system into other systems) , Usability (is it obvious how to get the system to do what it should), Richness of functionality, Availability of Specialized Skills (do users understand the principles of GIS), Integration with in-house datasets (Doesn’t this come under interoperability with standards?).

Links to the MAGIC web site: