Many actions in environmental management affect the visual appearance of a landscape as well as the natural resources within it. For example, building a visitor centre within a national park introduces a new building into the landscape, whilst carrying out a controlled burn of heath land will leave a visual ‘scar’ on the landscape for several months. It is becoming increasingly important to quantify the visual impact of environmental management options as well as their impact on ecological or water resources. DEMs can be used to help assess these visual impacts. More generally, visual depiction of landscapes, particularly simulated landscapes, can be a powerful way of communicating with the public and engaging them in the environmental decision-making process (Appleton et al, 2002;

Rural areas are increasingly used for recreation and tourism and rural landscapes are said by natural resource economists to have an ‘amenity value’, an inherent value to those who use them. Much recent GIS work (e.g. Scottish Natural Heritage / the Countryside Agency, 2003) has attempted to identify the perceived character of the landscape and 3-dimensional visualisation is related to this process of landscape character assessment. 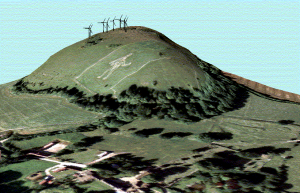 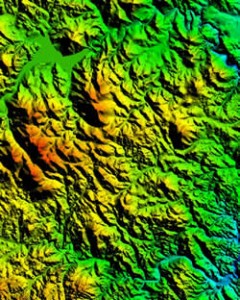 Figure 2: A DEM with shadows and one as a wire frame. Courtesy of USGS

Often, it is important to be able to predict the places from which a new building or forestry plantation may be seen. The area that can be seen from a particular point in the landscape has traditionally been referred to as a viewshed. However, more recently the phrase zone of theoretical visibility (ZTV) has been used, particularly in landscape architecture (Foote, 2009). The term ZTV is used particularly in connection with the viewshed output from a ‘bare earth’ DTM rather than a DSM that incorporates object heights because it is a worst case scenario. In reality, the extent of the visual impact may well be less than the ZTV suggests because vegetation, buildings and other objects may obscure landscape features from view. Follow-up fieldwork is often necessary to ascertain whether the ZTV is borne out in reality.

If you are using ArcGIS Desktop, download the attached zip file and undertake the GIS exercise included in the pdf file. This involves creating a 3-dimensional fly-through a DEM for a forested area.  If you are using ArcGIS Pro, download this zip file and undertake the exercise, which will introduce you to 3-dimensional fly-through’s via the software’s scene functionality.

This article provides a brief description of inter-visibility calculations from a practical, landscape design perspective:

For an example of DEMs being used for 3-dimensional visualisation, see: http://www.satimagingcorp.com/services/3dterrain/

Although not directly related to visualisation using DEMs, it is worth being aware of the related concept of landscape character assessment. You can find out more about this on Natural England’s web site: http://www.naturalengland.org.uk/ourwork/landscape/englands/character/default.aspx

The following book is the origin of the concepts of cell-based, local and global operations described above. Note that you are not intended to read it and it is cited here as a reference only: