Environmental assessment is regarded as a process that plays an integrative role, where the social, economic and biophysical systems are combined into a holistic picture of the world. Concern about the impact of human activities on the environment we live in has been evident throughout history, e.g. in issues regarding public health, air pollution and water pollution (to name a few). For a summary of notable events influencing environmental change and management, go through this Table 1.

It was not until the 1960s that this concern, as a result of population growth, urbanization, industrialization and the resultant pressures on natural resources, received a more public and global impetus. Rachel Carson’s Silent Spring, published in 1962, in which the harmful effects of pesticides were first brought to the attention of the public, is often credited for launching the modern environmental movement. The critique on technology and the harmful effects it has on the environment and sustainability, continued throughout the sixties and eventually led to the evolution of the practice of Environmental Assessment and Management.

After decades of continued failure of the political establishment in the United States to recognise the degradation of the environment, two events in the beginning of 1970 laid the foundation for environmental awareness and practice for the future. First was the National Environmental Policy Act (NEPA), signed into law on New Years’ day of that year. It requires federal agencies to integrate environmental values into their decision-making processes, by considering the environmental impacts of their proposed actions and reasonable alternatives to those actions. The second was a massive Earth Day demonstration – planned by Senator Gaylord Nelson in April – in which 20 million people across the country participated. The success of this event led to the creation of the Environmental Protection Agency (EPA) in July 1970. NEPA was the first environmental law that required Environmental Impact Statements (EISs) of proposed projects that will significantly affect the quality of the human environment. Three major provisions are contained within NEPA (Fedra et al., 1991):

Environmental quality was established as a leading national priority, by:

Two definitions of EIA, indicating the nature of the process, are that it is “… an assessment of impacts of a planned activity on the environment” (United Nations), and that it “… is the systematic process of identifying the future consequences of a current or proposed action” (International Association for Impact Assessment).

The role of EIA is formally recognised in Principle 17 of the Rio Declaration on Environment & Development:

Environmental impact assessment, as a national instrument, shall be undertaken for proposed activities that are likely to have a significant adverse impact on the environment and are subject to a decision of a competent national authority.

During the early years, EIAs mainly focused on the biophysical impacts of proposed projects (i.e. water and air quality, flora and fauna, climate and hydrology, etc.). As the process matured, the range of aspects increased and today social, health and economic issues are also examined. However, the integration and linking of biophysical and socio-economic impacts do not occur everywhere and to the same extent. In some countries social impacts are only given limited consideration, while in others the EIA process is supplemented by social and health impact assessments, thereby limiting the extent of integration.

The main focus of EIA is how the development should mitigate the negative environmental impacts, if it is approved. In general an EIA is done for specific development projects, such as nuclear power stations, large dam developments and housing developments. In a sense, EIA largely reacts to development proposals rather than proactively anticipating them. It does not consider whether, where and what type of development will be best for economic and social development, as well as the sustainability of the environment and its resources. Also, EIAs lack the strategic vision and spatial scope that could allow for the consideration of cumulative impacts of multiple projects and events in an area. For example, the building of one luxury hotel on an unspoilt Tanzanian beach might not have a significant negative impact on the environment, but the development of a 20km stretch of beach will definitely have an impact. Therefore, the project-to-project approach of EIA does not guarantee environmental quality. As a result, the concept of ‘tiering’ was introduced during the late 1980s. Tiering of environmental assessments at different planning levels, should allow for information flow through the whole planning process – from policy to project level – thereby limiting the repetitive gathering of information, as well as providing a better context within which to enhance decision-making.

These shortcomings in the EIA process led to the need for a more strategic approach to EA that can be incorporated in the policy, planning and programming level, allowing for a proactive process that will integrate the concept of sustainability much better than EIA. This process has become known as Strategic Environmental Assessment (SEA). Policies, plans and programs can be defined as:

SEA can strengthen EIA by establishing an appropriate context within which tiered decision-making is done, therefore determining the need and feasibility of initiatives and proposals. Figure 1 demonstrates this tiered approach. The concept of SEA is put forward as the assessment tool that addresses environmental implications of decisions made on a broader, more strategic level. 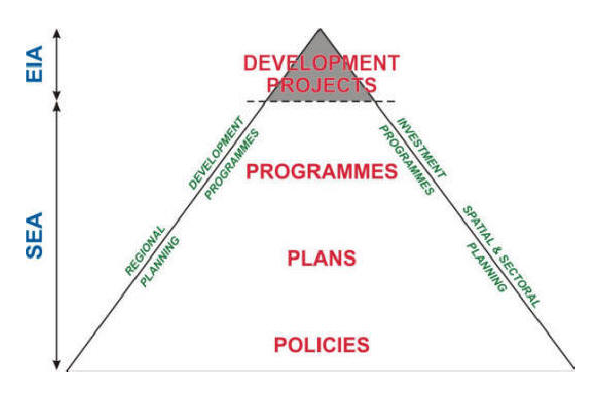 Of course, planning is not a linear process and as experience and knowledge increase, so does the understanding of different impacts on the environment improve. Hence, the tiering concept does not have a one-directional flow – from the strategic to the specific. Since uncertainty covers a major part of management and decision-making, the need for adaptive and flexible decision and management processes are essential, and one should rather view the process as a multi-directional information flow, each learning from the other processes above and / or below it.

To increase the effectiveness and strength of environmental assessment, legal directives or policies can be applied to mandate the implementation thereof. In many cases, regulations and procedural guidance elaborate on how EIA and SEA legislation should be implemented. Since the adoption of NEPA, several countries initiated legislation requiring EIA processes to consider environmental impacts in large-scale projects (see Figure 2); Since 1981, the US Agency for International Development (USAID) mandated the use of EIA before any significant development project is to be funded and approved.; This came about after the Agency was sued by a non-governmental organisation (NGO) from the United States when several Pakistani workers died in the early 1970s, due to negligent pesticide usage on a USAID funded project; Today most funding agencies, from the World Bank through to the Asian Development Bank, require some form of environmental assessment of large projects to determine the possible adverse environmental impacts that may result from these projects. 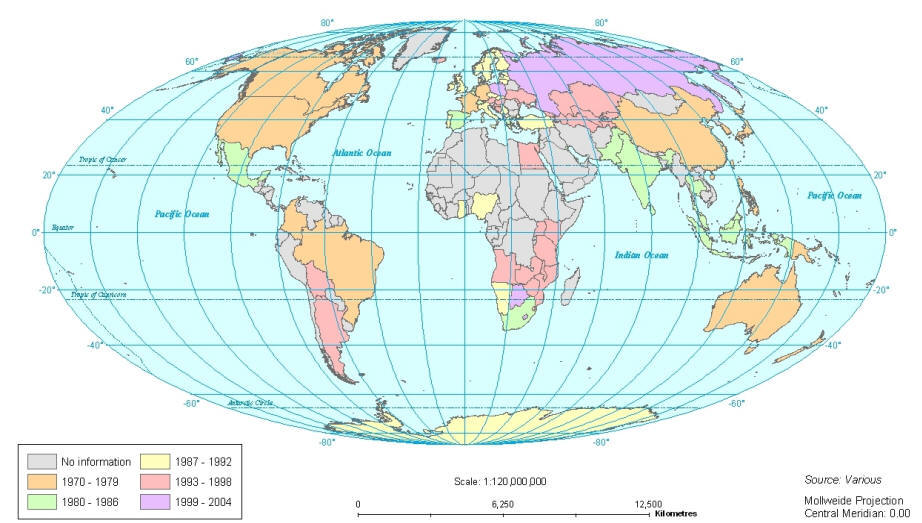 Figure 2: Date of acceptance of EIA legislation by country

After years of consultation, the European Commission passed the EIA Directive (85/337/EEC) in 1985, which was adopted in 1988. It stipulates the minimum procedural requirements for an EIA process and defines the projects that need to undergo EIA. The Directive has been amended in 1997 and 2003, to widen the mandatory application of EIA in Member States and to bring it in line with the Aarhus Convention (UN/ECE Convention of Access of Information, Public Participation in Decision-Making and Access to Justice in Environmental Matters). Member States are given a certain degree of freedom in the realisation of the Directive, which inevitably have an impact on the quality and effectiveness of EIA on development projects. This is due to the differences in political and social dynamics, legal and administrative frameworks, culture, and history.

To complement the EIA Directive, the European Commission started working on a proposal for a SEA Directive, which focused on the plan and program level. The Commission failed to agree on its contents until 2000. It was finally adopted in May 2001 and came into effect in June 2004. SEA is now mandatory for all plans and programs prepared for agriculture, forestry, fisheries, energy, industry, transport, waste management, water management, telecommunications, tourism, and town and country planning or land use.

Very early in the history of environmental assessment, the potential benefits of using spatial information to enhance the decision-making process was realised. Jack Dangermond founded – what is today one of the most successful GIS software companies – the Environmental Systems Research Institute (ESRI), in 1969. They quickly became involved in projects related to environmental questions, due to the growing recognition of environmental problems in the United States during the early 1970s, as discussed above.

The inherent spatial nature of GIS offers an ideal tool for assisting in the process of EIA and SEA. No other computerised system can handle these properties as well as GIS. The acceptance of using GIS technology to enhance environmental decision-making became even more pronounced after it was specifically mentioned in Agenda 21 as an effective tool. The appeal of GIS to environmental scientists and managers rests in its ability to collate data from diverse sources into a consistent form. It can also be used to develop empirical relationships between resource loss and environmental degradation, making GIS a valuable tool for assessing cumulative impacts, a key feature of environmental assessment.

Many of the skills of environmental GIS are based on specific GIS functions of varying degrees of simplicity and complexity, but one application area that still attracts widespread use is the application of GIS to the basic task of data integration, i.e. bringing together a list of data sets of relevance to a particular environmental management role, such as environmental assessment. The task is basic in the sense that it often comes first, providing a foundation for subsequent filtering, analysis or modeling. Many GIS professionals, however, having been confronted with this task, would argue that in practice it is often far from simple, and therefore far from basic. Data aggregation and standardisation pose significant technical challenges when the source data are difficult to locate, and are of dubious quality and diverse standards. But in addition, aggregation challenges the GIS operative and user with problematic issues of definition, which may undermine the efficacy of a dataset as an indicator. What data should be used? What is the value of this data and how reliably can it be used as indicators of environmental quality, vulnerability or impact? It is easy to discount these problems as being the responsibility of the environmental manager, not the environmental GIS specialist, but very often the two are the same person and in other cases the choice of indicators and standards for data integration represents a fusion of management and GIS issues and requirements.

EIA systems for different countries are very distinctive. For example, the provisions made for public participation can vary between countries, reflecting their traditions and styles of government. Some countries have established a separate EIA authority, while in others the process are administered by the Environment Department / Ministry. In Malaysia, for example, EIA was implemented through administrative procedures between 1979 and 1985 (see the Staerdahl et al, 2003 reference in the readings below). After 1985 EIA became mandatory for certain prescribed activities. For this activity, complete the empty boxes in the flowchart (Figure 3) describing the federal EIA process in Malaysia by using the Staerdahl reference below. 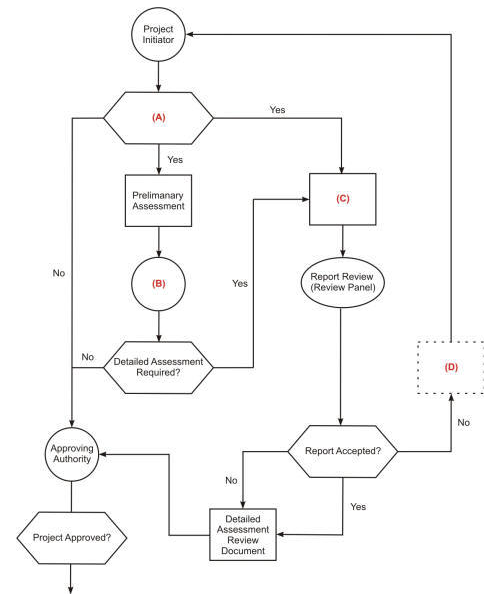 Read the article by Li (2004) and discuss the following issues: