This year there were lots of different research projects being carried out on site whilst we were excavating in the New House. Many of these were being carried out by postgraduate students. One of these students has written a blog post about his research.

The Trustees of Basingstoke Common kindly granted us permission to survey the Common using various techniques. Sam, Richard and Colin visited us at Basing House to support the survey of the Common, led by Dom Barker, University of Southampton. Dom has been directing survey work on the Common using magnetometers to try and locate features associated with the parliamentary siege works, thought to have been located in this area. Initial results are promising and will hopefully be clarified in the future by possible excavation. Sam, Richard and Colin were using metal detectors to see if they could identify patterns from 17th century find spots.

We were delighted to have along with us this season some locally based metal detectorists who were fantastic and took the time to talk to some of our students about how their equipment works and explained the kinds of signifiers that are important when carrying out a survey. Some of the volunteering detectors looked over our spoil heap for us over the course of the excavation, which brought up some interesting metal finds!

The team would like to say a big thank-you to both the local metal detectorists who came to help us with the survey, and also to the team from the University of Huddersfield. We can’t wait to see the results of the survey!

The Battlefield Archaeology of Basingstoke Common

Working in conjunction with the staff and students of the University of Southampton, Hampshire Museums Service, the University of York and the Basingstoke Archaeological and Historical Society as part of the Basing House Project 2014 season, myself and two colleagues from the University of Huddersfield undertook a systematic metal detector survey of land surrounding Basing House. We were searching for evidence of the fighting during the Civil War. The methodology used has previously been successfully utilised on numerous British and European battlefields. Pilot work in 2009 had recovered a number of 17th century military artefacts including lead musket and artillery shot and powder flask fittings. The recent survey returned to this site and vastly expanded it. 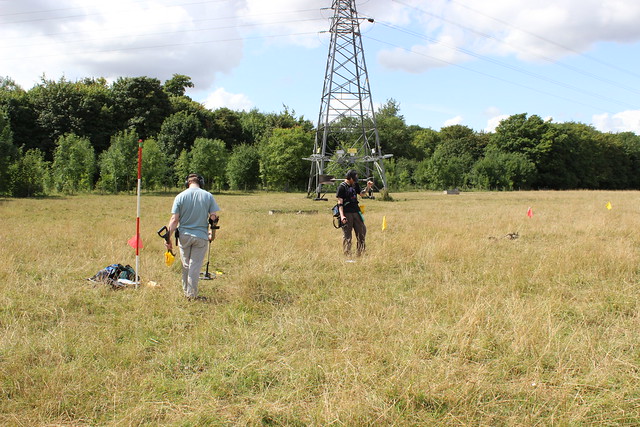 It is well documented in contemporary accounts that some form of Parliamentarian siege work existed on the Common, the location of which Dom’s team were gathering evidence for as part of the magnetometry survey this summer. Numerous, often unrecorded skirmishes took place in what was effectively the ‘no mans land’ between Parliamentarian siege lines and Royalist defences around Basing House. The defenders may have sallied forth to slight the besiegers’ works and disable their cannon, or the attackers may have sent an infantry force to probe for a weakness in the House’s defence. Any such engagements will leave a unique artefactual signature on the battlefield, most commonly in the form of lead shot and items which may have been lost or broken in combat. General military activity in the area will also result in similar finds of items which have been dropped, lost or discarded. 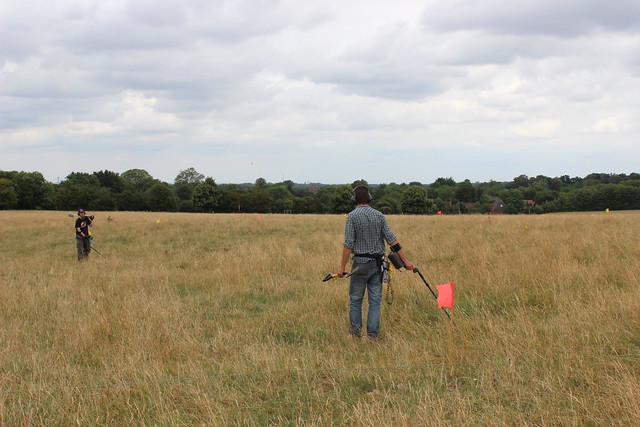 Richard and Sam working together to systematically cover an area. Photo by Richard Leese. 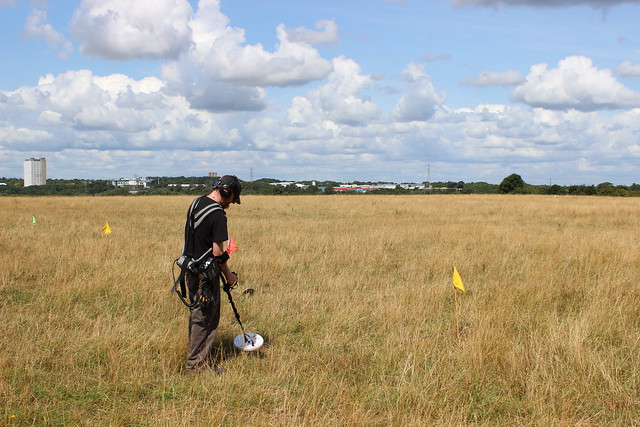 Richard, with Basingstoke on the horizon. Photo by Richard Leese.

The metal detector survey that was carried out involves the systematic recovery of artefacts through archaeological means, and their accurate plotting with GPS so that distributions and patterns can start to be analysed. Such plots enable a unique view into an event which may have only lasted a few minutes. 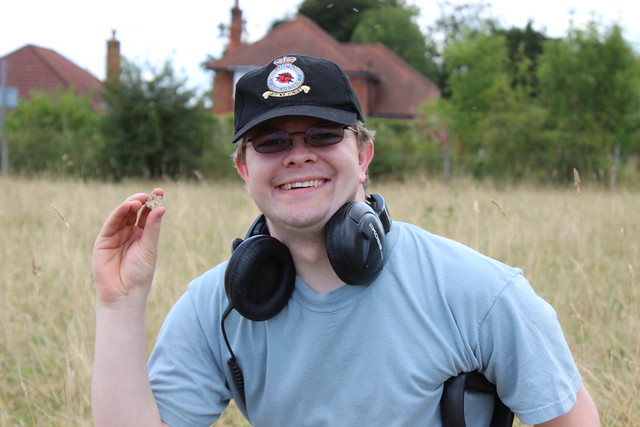 The finds and digital data from the survey are still to be examined in detail but already it is clear that the survey was a resounding success. The recovery of large numbers of lead shot, of calibres ranging from pistol to small artillery, perhaps indicates less damage by amateur detecting than previously thought. Such a discovery is certainly encouraging and is a strong testament to the fierceness of the fighting that took place around the House. Large numbers of the shot show evidence for having been fired in anger, perhaps taking life or limb. 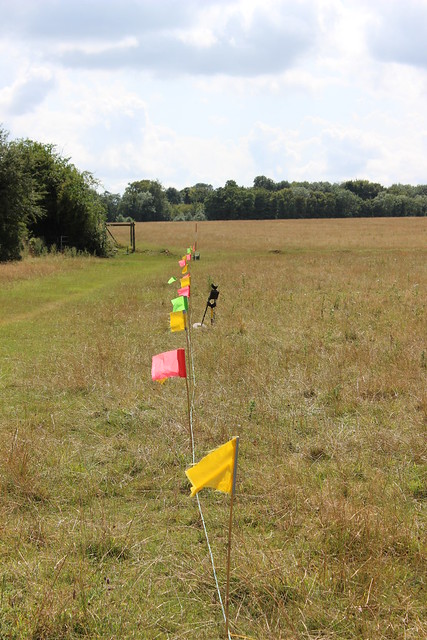 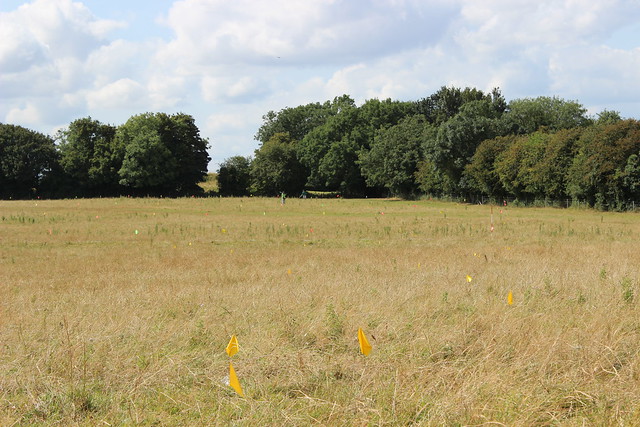 The flags and tiny surveyors give an idea of the scale of the work done this summer! Photo by Richard Leese.

With the recent and rather moving commemorations of the start of the First World War, is it not only right that we remember the men who fought and died for their cause in the 17th century? The passage of time has been greater but bravery in the face of your enemy calls for great courage in any historical period. The quiet fields and towns we now call home were once bloody battlefields and the final resting place of many hundreds of brave men. The sites of their final moments, that battlefield archaeology has the ability to re-discover should ultimately be recorded, remembered and protected. 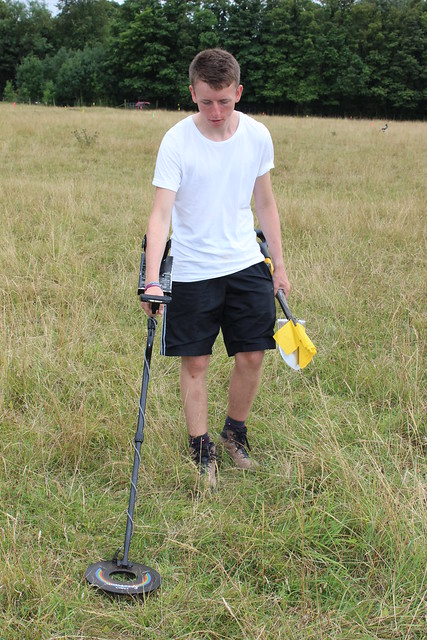 University of Southampton student, Richard, learning how to use the equipment. Photo by Richard Leese.