Why do we trawl, dredge, net and grab?

To see what is living in the water column, above the seabed as well as on and in the seabed. Whilst diving can provide us with a direct view of the visible animals and plants growing on the seabed, it is a specialist and very time consuming activity that can only be used in relatively shallow water (say 0-30m). Diving is used if the scientific objectives gained from a ‘diver’s eye view’ justify the time and cost involved. For routine sampling, or sampling in places where diving is inappropriate, trawls nets and grabs can provide the samples we need to see what is living in the ocean and where it can be found. 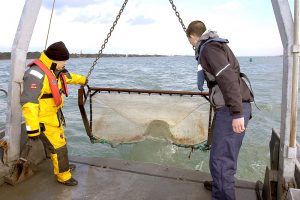 A beam trawl, as the name implies, is a trawl where the mouth is held open by a metal beam. The beam is mounted on trawl heads or skids, one at each side of the net. The skids slide across the sea bed dragging the ground rope and net behind. The ground rope runs in an arc behind the skids and has weights attached, to hold it down against the seabed and agitate the fish, which hopefully attempt to swim away and get caught in the net. Commercially this gear is used primarily for flatfish. Several lengths of tickler chains will often be used ahead of the ground rope to raise fish which may otherwise be over-run.

This type of net is designed to catch fish living on or near the seabed (demersal species) but will sometimes catch fish that normally live in the main body of water (pelagic species). In addition the net will catch some benthic species such as shell fish, seaweeds and crustacean. Catching fish in this way allows scientists to know what species are living in which areas of the estuary, and because the trawls are short and the water shallow, most fish survive and can be returned to the water after examination. 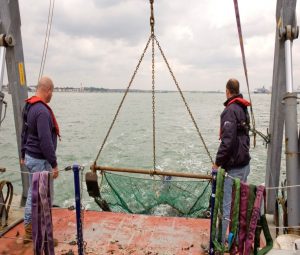 By sampling at different times of year we can measure growth of individuals within a population, by tagging and re-catching fish we can estimate population size, growth rates and also discover how far the fish travel away from their original point of capture. We can also look at detailed aspects of the fish’s life cycle, when they reproduce and what they feed on, to give us a better understanding of the way the sea supports its fish populations.

Often during the summer months there will be large volumes of seaweed in the water, which quickly fill the beam trawl net and make it very heavy and difficult to recover. During these periods it is often easier and safer to use an alternative method to collect samples. One alternative is to use an oyster dredge.

Dredges are designed to be pulled behind a boat and to scrape along the seabed, the catch being held in mesh bag behind the mouth of the dredge. Dredging is used to harvest commercial shellfish like oysters, clams and cockles and specialist designs have been developed for different uses. 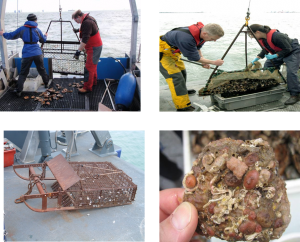 An oyster dredge is designed primarily to catch oysters but will catch other shellfish and benthic species. We use two types, a traditional ‘A’ frame oyster dredge and a modern ‘ladder’ dredge, as used commercially in the Solent for Oyster fishing. Dredges aren’t very selective so even when targeting oysters we will catch a variety of the animals and plants living on the seabed. An oyster dredge will sometimes catch small demersal fish but this is usually as a result of good fortune rather than design.

As the picture above shows the ‘A’ frame oyster dredge is a net held onto a triangular frame. The bottom edge of the triangle is a flat metal plate designed to dig into the seabed surface. This allows collection of whatever is disturbed, in the net. The ladder dredge is a more robust dredge and has a strong metal mesh that holds the catch.

The other dredge that can be used is one designed to harvest clams from the muddy parts of Southampton Water. This dredge is very heavy and digs right into the seabed to remove the clams.One of the good things about oysters is that their shell provides a habitat for lots of other species so we are surveying not just oysters but lots of other species as well!

How do you quantify trawl/dredge sample? 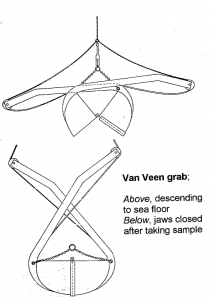 These allow us to discover what is living in the seabed by ‘grabbing’ a chunk of the mud and bringing it up to the surface. We often use a Van Veen grab (named after its inventor) which works well in mud. On
ce the sample is aboard we can investigate the mud, looking at the size of the mud particles and also for signs of pollution. We can wash the animals out onto a sieve and then count and identify them.

The animals that live in the mud are known as infauna, and changes in the infaunal species composition are often used to judge if there have been any changes in environmental quality. Marine scientists use changes in number and species in the infaunal community to judge if there have been negative effects from say, a pollution event, or if disturbance from fishing or dredging activity is harming the marine environment 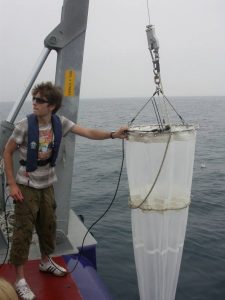 Though many plankton species are microscopic, plankton includes plants and animals of a wide range of sizes, such as jelly fish, which can grow many metres in length. The plankton is made up of animals (zooplankton) and plants (phytoplankton) that live in the water column and passively drift with the flow of the water. Many animals, like oysters and clams, have larval stages that live in the plankton for a few weeks and then settle onto the seabed. These animals, which are only plankton for part of their life are known as meroplankton. There are many other animals, like copepods, that live their whole life as plankton. These are known as holoplankton.

As many of the planktonic animals and plants are very small, we need to use nets with very small holes (between 0.002 and 0.0006 mm) in them. These ‘sieve’ the plankton from the water, as they are towed slowly through the water. These are collectively known as plankton nets 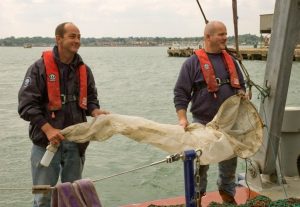 Plankton nets are long conical nets, often used with a flow meter at the mouth, to measure how much water goes through the net and sometimes a depth sensor is also attached. By sampling plankton we can just look at the range of species present. This is important because long term changes in the plankton can change the food web available to other animals and may even change the distribution of fish, like herring which prefer certain plankton species to eat. By focusing on a particular group or species we can see if they are producing enough larvae for the local population to survive. Quite often we will be looking for the larval stages of a commercial species such as oysters. In areas such as  the Solent, where oyster fishing is in decline, the presence of larvae in the water is a good sign that the oysters are fit enough to reproduce.

Have a go at labelling the various sampling tools on R.V. Callista below: