By Aleksander Lidtke on April 16, 2016 in Progress update

Our Clyde Space battery has been delivered! It came in a large and rather heavy parcel: 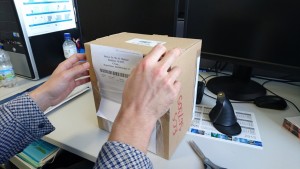 Unwrapping the parcel with the Clyde Space battery inside.

As I was carrying it into the office to see what’s in it I was wondering how they managed to make the battery, which fits into a 10 by 10 cm cubesat envelope, so heavy. Turns out the battery came in a huge plastic box filled mostly with protective foam: 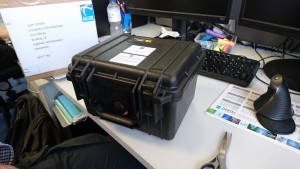 The box containing the battery. It’s pretty big and heavy given the 9 by 9 cm size of the actual battery.

The size of the box seemed like a bit of an overkill to me but hey, better safe then sorry.

It’s a pretty big day for the UoS3 because the battery is the final piece of space-grade hardware that we didn’t have until now. We’re still in the process of procuring the remaining three solar panels from DHV Technology, but we already have two of them and tested them with our power subsystem. Right now we’re in the position to put the entire satellite together (integration, it’s professionally called) and test all the functionality. Some pretty exciting times ahead!

Testing and calibrating the magnetometer
European Workshop on Microelectronics Education 2016