By Aleksander Lidtke on September 8, 2016 in Uncategorized

We’ve been busy preparing for the test campaign of the UoS3 over the summer. To help with this task and realise our educational mission at the same time, we were working with two interns, Denisa and Ben. They have just finished the second year of their undergraduate courses at the University of Southampton.

Denisa studies Electrical and Electronic Engineering, and we’ve asked her to test the interfaces between the elements of the UoS3 power subsystem. In more layman terms, she’s been putting it all together and making sure that it works as intended. 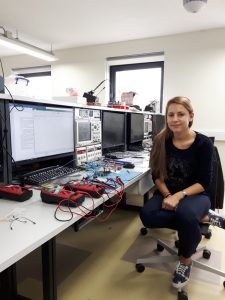 Our intern, Denisa, testing the functionality of the complete UoS3 power subsystem.

During its flight, a rocket vibrates violently. Consequently, its payload is subjected to vibrations of various amplitudes and frequencies. To make sure that the UoS3 will survive these vibrations during launch, we will replicate the expected vibration spectrum on the ground using specialised equipment at the University of Southampton. In order to do this, however, we need to mount the cubesat on a vibrating platform in a way similar to the way it will be mounted in the rocket. Ben, who studies Aeronautics and Astronautics, has designed, optimised and manufactured a fixture to achieve just this. 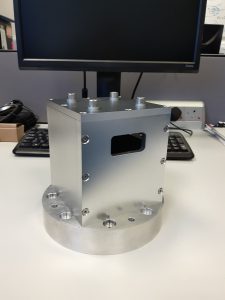 Aluminium fixture that we’ll use to fix the UoS3 to a vibrating platform, which will replicate the vibration spectrum the cubesat will experience during launch. Entirely designed and procured by our intern Ben.

Neither of these is a straightforward and simple task. It’s uplifting to see that the University of Southampton can turn a high-school student into a capable engineer in just two years.