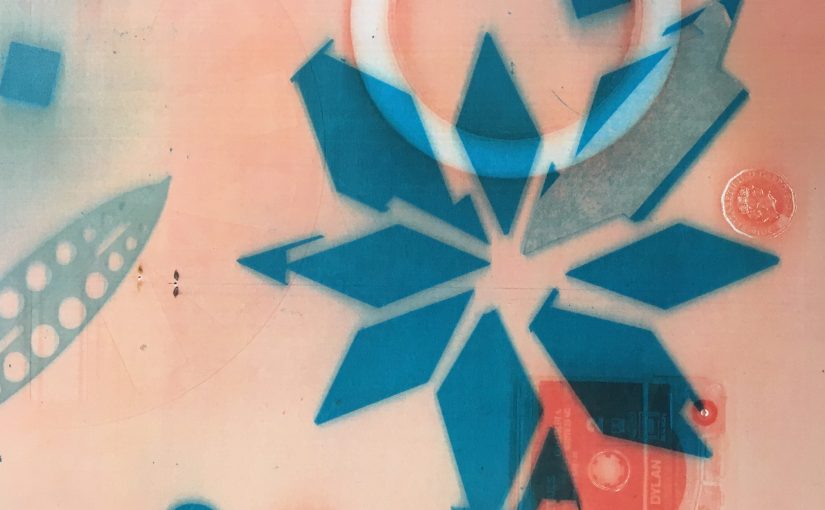 Graphic Designer Katie Evans (WSA graduate, current MA student and designer with WSA 3015 studio) led us in a session exploring techniques linked to Risograph printing. We used processes which mimicked the Risograph, getting to grips with the concepts of how you might create an edition or publication.

Using scanners, in built mac cameras, the photocopier (a pretty fancy one) and straight forward cutting and sticking we physically recreated the Risograph process to understand its pro’s and cons.

A set of found objects were given as a starting point and members were divided up into groups and worked their way around ‘stations’ in the room; each had a different set of equipment and a series of action words as prompts.

The groups then had free reign to respond in any way they chose; which ranged from creating 3D sculptures combining cutlery and fruit, to layering their own portraits over photocopied cassette tapes, perspex remnants from the laser cutter and stencilled shapes cut and repeated to form abstract patterns.

The outcomes were so varied and showed us how often having constraints can stop you worrying about outcomes and allow you to focus on exploring the possibilities in the process. Some of the layered single coloured photocopied objects were really very beautiful.

Take a look at our next post when we actually got to use the Risograph itself! 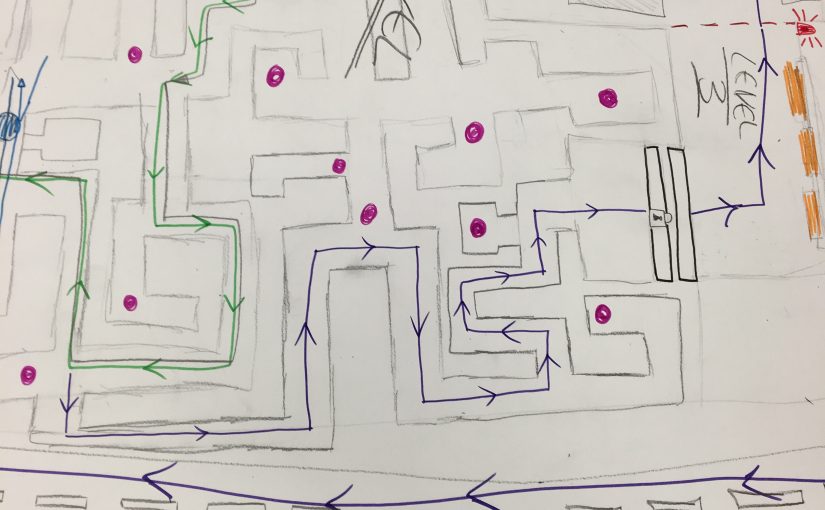 This was our second session with Chris and Sam from Games Design and Art . Developing on from last week’s assembled characters, which combined humans, monsters, animals, sea creatures and fantastical beasts, we explored the kinds of worlds they might live in and how they might use their special powers for good or evil.

Chris introduced numerous game styles: puzzle, adventure, combat, shoot ’em up, simulation, strategy and role play. These styles were assigned to the group, who discussed their characters, how they might interact and what narratives their game might contain to hook in the player.

The members got so involved in their game development and created thoroughly plausible outcomes; from a rat being chased around a kitchen by a crazy chef, to an intergalactic war centred around a space diner, to escaping from a scientific laboratory.

Everyone’s ideas were pitched back to the group at the end of the session. There was so much thought put into these proposals – don’t be surprised if some end up as fully fledges games in the future. 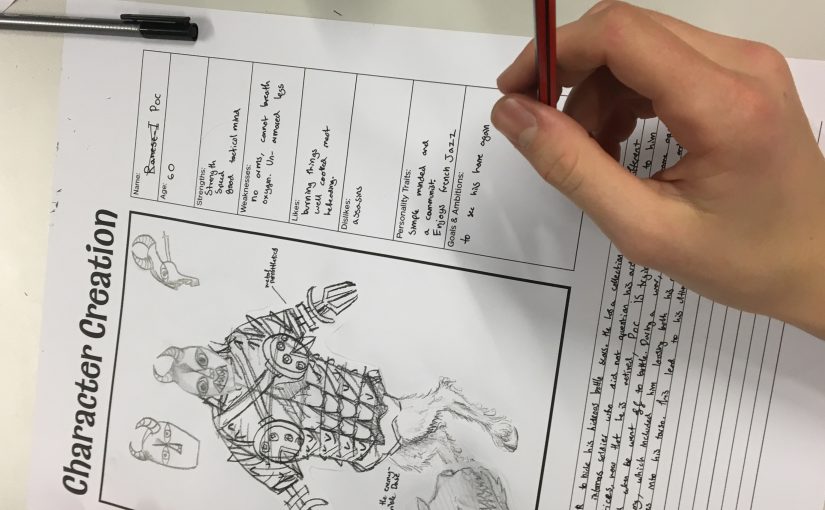 These workshops were focusing on Games Design and Art; at WSA this might include developing narratives, character and environment as well as coding, for computer, board or card games. One example of how broadly the definition of  ‘games’ are taken was WSA students working on a brief to create a mini golf computer game, which they then translated into a physical game, including the windmills!

We got started with a version of ‘exquisite corpse’ where everyone drew at least two heads, torsos, and sets of arms and legs – there were no restrictions so we had humans, monsters, animals, sea creatures, fantastical beasts and the rest…

These were then cut out and swapped around so everyone could create their own ‘Frankenstein’ style character. The drawing skills in the group were fantastic, showing how well they could draw forms from memory although there were resources to reference if needed. Mixing up the body parts stopped anyone from sticking to preconceived ideas around what a games character ‘should’ look like.

These assembled characters were then given names, personality traits, skills and a back story. The group got really into this and needed no encouragement in developing wild narratives around their creations.

Adam Procter, Programme Leader – BA (Hons) Games Design & Art also visited us during the session to speak with the group about the course and took us to trial some games developed by first year students. It was great to see ‘work in progress’ to get an idea of what kinds of computer games were being designed and how they tested out basic prototype ideas to get player feedback. The WSA students had also included their inspiration and ideas of how graphics could be developed. The Saturday Club members enjoyed seeing these games in their raw state, getting an insight in to how the slick finished product we experience as games players starts out.

Check out the free coding software to start developing your own games Chris mentioned here: https://unity3d.com/