By Aleksander Lidtke on December 2, 2015 in Progress update, Project

Today is a big day for us and UoS3 – we received two of our solar panels today! 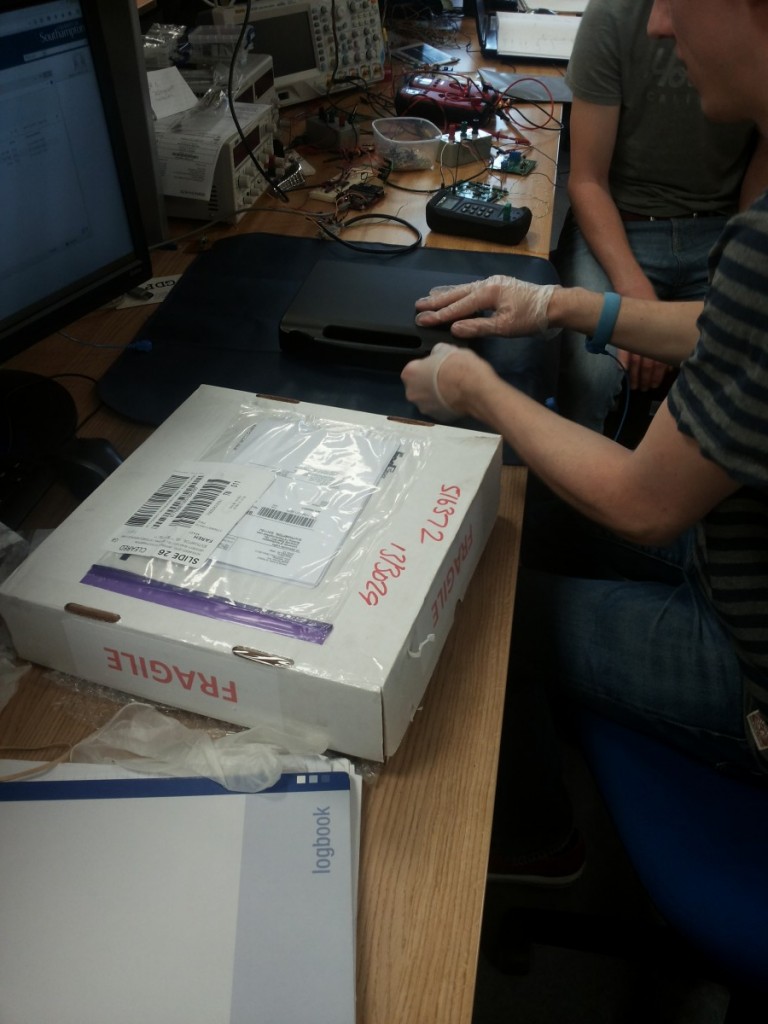 Unpacking the first two solar panels. They’re worth so much (on our project’s scale) that no-one wanted to do it!

They were manufactured by DHV Technology, a Spanish company that has been working with us to design and build custom-made solar panels that will fit into our cubesat. So far we only bought two of these because we need them to test the subsystem that will collect energy from them, store it in batteries and deliver it to all the electronic equipment when needed. Once we’re happy we can do that (none of us has ever built a satellite before), we will buy the remaining three.

We need such custom solar panels to be able to use our in-house manufactured structure. Using this structure is important because we want to make as many of the UoS3 components at the University as possible. This helps us reduce cost and increase the return of the mission – after all, one of our main objectives is exposing as many students to hands-on satellite engineering as possible.

The solar panels contain high-efficiency, triple-junction GaAs solar cells. These cells are amongst some of the best in the world and have been flown on many high-calibre missions such as the Automated Transfer Vehicle, Glonass, or Meteosat satellites. There are two such cells per panel and UoS3 will have five solar panels in total. That is one panel on every face of the satellite, with the exception of the face that is nominally pointed toward the Earth (i.e. the nadir-pointing face, as it is professionally called). This is because that face accommodates our camera and so there isn’t enough space for solar cells too. Besides, there won’t be much sunlight coming from the direction of the Earth anyway.

Here are some photos of one of the solar panels with some explanation as to how it works. Enjoy as much as we are!