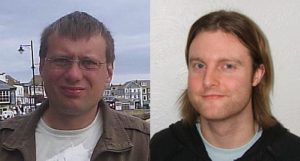 It’s still rather summery here in Southampton, but the new semester is almost underway. At times the wind picks up, the rain mists down, and there’s a humidity in the air that reminds us we’re located near the water. In celebration of the new semester and Southampton’s maritime history, we’ve got a new episode of Southampton History Speaks. This time around, listen to Gary Baker and Craig Lambert talk to Rachel Herrmann about medieval and early modern English maritime shipping.

You’ll learn about the Grace Dieu and its significance in the context of this year’s Agincourt commemorations, how one researches the medieval world when one’s sources are just lists and lists and lists, and why Gary and Craig think “databasing” should be a word. This is an episode for historians interested in big datasets and how to wrangle them, but it’s also an episode for everyone interested in maritime history more broadly.

Lambert, Craig. ‘The Cinque Ports in the wars of Edward II and Edward III: New Methodologies and Shipping Estimates’, in Roles of the Sea in Medieval England, ed. Richard Gorski (Woodbridge: Boydell & Brewer, 2012): 59-78.