Tonight our summer excavation at the foot of Avebury Down features on the BBC’s Digging for Britain (Wed 22nd Nov, 9pm BBC4). The Excavation is part of the Living with Monuments  research project run by the Universities of Southampton, Leicester, Cambridge and Ghent with Allen Environmental Archaeology and the National Trust. It aims to characterize Neolithic and Early Bronze Age settlement in the Avebury region, a period and place where most archaeology has previously focused on the large monuments. 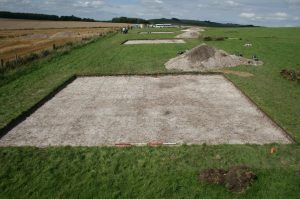 The excavation was directed by Josh Pollard (University of Southampton) and Mark Gillings (University of Leicester) and included archaeology students from these institutions. It revealed a large flint scatter- evidence of flint working that may have spanned 1500 years from the Middle Neolithic. Natural flint is found nearby on the slopes of Avebury Down, and exploitation of this flint may explain the presence of the scatter. Post holes and pits hint at the presence of settlement.