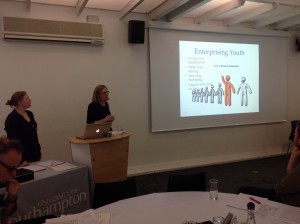 In early September, the BBC news website ran a story with the headline ‘Women may take best jobs by 2020.’ Reporting on evidence from the UK Commission for Employment and Skills (UKCES), the BBC claimed that “men could struggle to get highly skilled jobs because women are increasing skills and qualifications at higher rates.” (BBC News: Women may take best jobs by 2020, say researchers).

Phrased like that, that the acquisition of qualifications appears as a zero-sum game in which women’s apparent attainment directly hampers the position of men. This representation is potentially damaging for gender equality campaigning, given the extent to which it promotes antagonistic relations between men and women and implies that any improvements in the labour market position of women will be at the direct expense of men.

One of the limitations of the UKCES analysis is that formal qualifications are used as a proxy for skill more broadly. Yet as feminist researchers consistently have identified, the idea of ‘skill’ itself is highly gendered: skills are differently valued depending upon whether they are possessed by men or women. Both now and historically, work done by women often hasn’t been considered to be ‘skilled’. At some times, in some places and in some sectors, formal qualifications may have advanced women’s labour market position, but in other circumstances inequalities persist even when women possess equivalent levels of qualification relative to male contemporaries. For example, the dominance of men in the UK design sector (particularly at senior levels) has endured despite a growing number of women enrolled on undergraduate and postgraduate design courses through the last two decades, as well as some level of expansion in the number of women in junior design posts.

It is important to consider the specificities of skill definition within individual labour market sectors. Within creative industries such as design, formal qualifications may be seen to be important, but design skills also are judged informally. Employers assess job applicants’ abilities in ways beyond simply their level of qualification. Informal evaluation—such as the extent to which employers perceive and assess applicants’ ‘fit’ within an existing work force—clearly can have negative implications for gender as well as ethnic diversity across many jobs. However creative ‘skills’ are often constructed as in some way inherent—as deriving from innate capabilities. In arenas where intrinsic or bodily ability is perceived to form a central part of skill, the potential aptitude of different bodies can be evaluated unequally. For example, in product design, the capacity to construct a physical prototype, to manipulate materials or even to use a hammer is often coded as essentially masculine, and a stereotyped separation of gender boundaries emerges.

The second half of the September BBC news report did in fact allude to the potential disconnection between formal qualification and evaluated ‘skill’: it notes that “… for many women their higher qualifications are not leading to better pay and jobs”. This latter point might more appropriately have been placed as the headline: why is it that women’s qualifications are undervalued and what challenges might be made to this state of affairs?