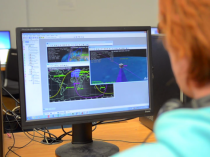 The primary function of the ACS on satellite is to point the antennas to allow good communication with the SUSF groundstation in Southampton.

The UoS3 will use a passive magnetic Attitude Control Subsystem (ACS), because such a solution does not use any power.  Power consumption is a limiting factor on the spacecraft, therefore such an ACS solution is preferable to an active pointing solution.  In addition, the passive ACS does not have an moving/electrical parts and therefore has an improved reliability.  It also removes the requirement of computer control, allowing the computer to be periodically turned off to save energy.

Similar systems have been flown before on CubeSat missions as can be seen here and here.

The ACS is sized to provide: