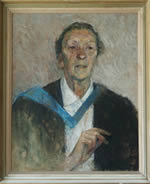 One month today, WiSET will be hosting the annual Campbell Lecture, in celebration of women in STEM subjects. This year’s double bill is co-sponsored by the WFRC, but it’s surprisingly hard to find information on who Ishbel Campbell was, and why we have a lecture named after her. WFRC coordinator Jo Corsi decided to find out more.

Ishbel Grace MacNaughton Campbell was the 9th child of Reverend John Campbell and Elizabeth Balfour Renwick, of Newtonmore, Scotland. [1] She was a pioneering chemist, who spent much of her academic life at the University of Southampton, and can be considered to be a fantastic influence on young chemistry students (particularly female students) during her time here.

Ish, as she was known, was a science student at the University of St Andrews from 1923 – 1927, and graduated with First Class Honours. Following this she was able to take up a place as a research student, with the support of a Carnegie Fellowship. Her PhD was awarded in 1931, although she did not attend graduation as she was at that time working at Cornell University, funded by a Commonwealth Fellowship [2] (one of the first awarded to a woman,[3] now known as a Harkness Fellowship [4]).

After a brief period at Bedford College, which was the first higher education college for women in Britain, Ish joined the Chemistry department at Southampton in 1938. [3] Whilst at Southampton she was responsible for teaching organic chemistry, [5] as well as undertaking her own research. She is most well-known for her work on organic compounds of the Group V elements, [6] in days before modern spectroscopic techniques were available. Former PhD student, Martin Hocking recalls: “Ish was experimentally well known for her ability to coax more-or-less pure crystals of a new substance from tiny amounts of solution of an unlikely looking, gluey reaction product.  It was rumoured that her success was the beneficiary of traces of her cigarette ash that provided nuclei in the crystallization test tube to help initiate the crystallization process aided by temperature changes and by scratching the side of the tube with a glass rod.” [3]

Ish was popular with her students, who remember a caring and supportive lecturer. Brain Halton, Emeritus Professor of Chemistry at the Victoria University of Wellington recalls: “Ishbel Campbell waited with us outside the examination hall checking that we were all there and wishing us the best. If one of a class failed to appear, she would promptly rush away to bring the errant being in”. [5]

Ish was physically active, and is known to have enjoyed long walks in the hills around Southampton. She also played tennis into her 80s, [3] in addition to representing the University of St Andrews as an undergraduate. [2] She was a regular sight at the University well after her retirement, with Hocking recalling that she never really retired: “Long after her official retirement Ish enthusiastically gave us a tour of the new medical faculty at Southampton and where she had volunteered to teach courses in chemistry to new medical students.  ‘It keeps me young’ she said, and it certainly worked!”. [3]

After her arrival at the University of Southampton, Ish lived in Highfield for the remainder of her life, first in Glebe Court, [7] and later in Orchards way. Ish was elected Fellow of the Chemical Society in 1940, [7] and was later promoted to Reader. [6] Ish passed away at a residential home in Blenheim Avenue, Southampton in October 1997, at 91 years of age. [8]

Today, there are few reminders on campus of a woman who spent well over 50 years at the University of Southampton. The undergraduate teaching facilities on level 5 of the Chemistry building are named the Campbell Laboratory, and are situated where her own research would have taken place. [4] On March 19th, we will celebrate diversity with the annual Campbell lecture, hosted by WiSET, with speakers Curt Rice and Athene Donald. I hope a few people will take a minute to think of the “slight, but physically tough and proud Scottish spinster” [3] in whose name we are gathering.

Tickets to the lecture are available (for free) through Eventbrite.

With thanks to Geoff and Marelene Rayner-Canham for sharing their notes.