Where did you go and what was your YARP topic? 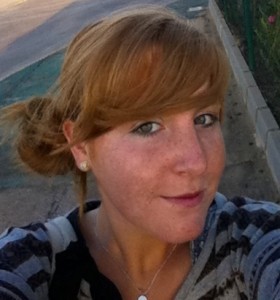 I spent my year abroad in a small town called Épône in zone 5 of the Paris region, 40 km west of Paris and 50min away by train. I was lucky enough to have a great “Responsable” who introduced me to a fabulous host family – La famille Bacca. I lived Mme Bacca and her two children, Loris (18) and Lou (15 and one of my students), and a Colombian Spanish assistant (Rajib) in a massive 4 floor, traditional French house which happened to have a gym and a wine cellar (vive la France indeed!).

Although I only lived a 5-minute walk away from my workplace, the Collège Benjamin Franklin, I still regularly accepted lifts from my very friendly work colleagues (I really appreciated it if you guys are reading!).

What motivations did you have for writing your YARP?

Apart from wanting a good mark for my Year Abroad as part of my university studies, my main motivation for writing my YARP was curiosity. Having attended an international school with many French speakers, and then meeting more francophonies at university, I had picked up on the fact that they used lots of “English” words in a normal French sentence. I had also noted the same in French songs and French films, and so I wanted to use my year abroad and YARP to research this more in depth. I wanted to see if English was used in France (specifically in the area where I was staying) and if it was, then who used it? Did different age groups use it differently? Why did some age groups speak better or worse English than others? What was their motivation for learning or not learning it? Etc.

How and where did you collect your data?

I collected my data in many different ways and places. For example, I carried a field diary everywhere with me in which whenever I heard or saw an English sentence, I would write the time, date, context, who said it and any other thoughts I had on it at the time. So, when I was at home, if I was having a conversation with someone and they used an English word, I would either continue the conversation, write down my finding and ask them about it later, or I would ask them at that exact moment why they had used that particular word; it is important in many cases though not to break the flow of the conversation.

I also used my field diary lots around school, in the staffroom, lunch hall, corridors, classroom and I even took it to sports activities with me. Did you know the French say “Le smash” for a smash hit in badminton? It is so easy to forget small things, so for me my diaries were essential and always with me.

Both in school and at home I used formal and informal interviews. The informal ones being something like, if someone said an English word, I may ask them to explain why they used it or what they think it means within the conversation in an everyday situation. The formal interviews were conducted after a few months of getting to know my subjects and having enough information to use to create interview questions. At home, we sat in the kitchen (which was always very quiet) and I asked my subject questions and let them respond. Sometimes I would ask them to elaborate on a certain point, and then I would move on.   At school, I did the same, but in a quiet area of the staffroom. I used a Dictaphone to record the interview, as people talk quickly and it’s very hard to write down what they’re saying as they say it (and can be quite off-putting for both yourself and them).

I also used lots of photography throughout my project. To exemplify, with the permission of the school and pupils, I was able to photograph any clothing with English words or phrases, and any English use around school on posters and any other materials. I took photos around town of sign posts, graffiti, posters, and photos of products in shops with English inscriptions or words. 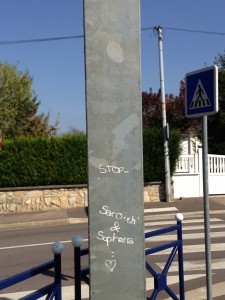 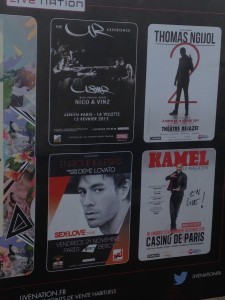 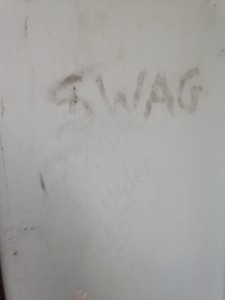 In an attempt to do something innovative, I also created some work sheets for my pupils, which aimed at seeing how much they did or didn’t use English to name television series and games. I wanted to see which ones they named in French/ English, why they did that and if their answers varied according to different age groups (I even got the staff to fill some in). I did it in a quiz-like fashion to make it more exciting!

So to conclude, I used mixture of interviews (formal and informal), photography, field diaries and created work sheets to collect my information.

What was the most positive experience you had whilst conducting your research?

My most positive experience during my research was definitely getting to know and talk to different people. I am naturally a very talkative person (as anyone who knows me will tell you, j’en suis sûre), so I really enjoyed making friends with the other staff and my French (and Colombian) family members, and then seeing that they trusted me enough to take part in my project. In fact, one specific work colleague, Marif, went out of her way to help me find extra material for my project without being asked! She even made her own list for me of English words that she heard her friends and students using, the context and what they mean to French people i.e. Un jogging looking like the verb “to jog”, but meaning in French “a tracksuit”.

Did ethnographic research make an impact on your year abroad experience?

I am so glad that I chose to partake in the Ethnographic Encounters project, as before hearing about this I had never even heard of “ethnography”. My whole project was completely ethnographic, so my research methods definitely made an impact in my YARP.

What’s the most valuable thing you learned during your project?

It is difficult to choose a “most” valuable thing, as I have learnt about so many ways to conduct research i.e. interviews, photography, field diaries etc. that I had never used before in a university project or paper.

I would probably say though that my most valuable skills I have learnt are in interviewing, as I have learnt how to form different types of questions and when to speak and not speak during interviews.  Being very chatty, it was hard at the beginning not to ramble on when asking questions, or put in any of my own ideas, so I have definitely improved on that.