I was in Frankfurt am Main for my year abroad, where I studied at the Goethe University. My YARP was about the teaching of World War 2 in German schools an 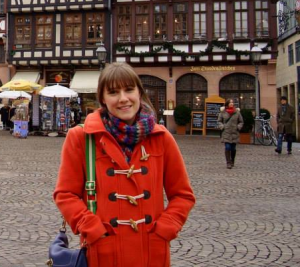 d whether the topic is taught appropriately or not.

Many people were encouraged to look at topics relevant to the area they were going to, but since I’m not particularly interested in finance (perhaps I would be if I understood it…), I looked at topics of German history that I found interesting. I find the idea of “Vergangenheitsbewältigung” (coming to terms with the past) interesting in terms of WW2, so decided to look more into this. By looking into the teaching of the subject to young people in Germany, I hoped to be able to draw some conclusions as to how Germany has come to terms with its past.

I used a mixture of texts and interviews for my YARP. The texts were generally available either online, in Southampton or in Frankfurt so I was pretty lucky in this respect. Most of the interviews ended up being done over email which wasn’t what I had planned, but it did save a lot of time transcribing!

The sense of satisfaction at producing a 6000 word document in another language – complete with references, annexes, title pages and other assorted academic things – was one of the reasons why I was glad that we had to write a research project on our year abroad.

The main challenge I faced during my YARP was collecting interviews. I wanted to include accounts of people who had recently been through the German school system to get more of an idea how they found it; I had a general idea of what was taught but it was less clear how students felt about this. Unfortunately, I happened to be in a WG (shared flat) where none of my flatmates had been through the German school system, and I didn’t feel I knew anyone who had been to school in Germany well enough to ask them about what I considered to be a sensitive topic.

Luckily, I knew someone who was sharing with several people who had been to school in Germany and I ended up having 8 interviews with people who had been to school in a variety of German states. Since German schools and curricula differ from state to state, I was really pleased to have this variety! So the main challenge turned into one of the most positive experiences as I found myself with a lot of interesting and useful information.

The sense of satisfaction at producing a 6000 word document in another language – complete with references, annexes, title pages and other assorted academic things – was one of the reasons why I was glad that we had to write a research project on our year abroad. The fact that I could do something like this was probably one of the most important things that I learnt during the project; 2,500 word essays in final year suddenly didn’t seem quite as daunting!

There were definitely areas that I could have improved on in my YARP, time management probably being the main one. If I was doing it again, I would definitely be more disciplined by giving myself set times to work on it throughout the year…but alas I am not! This is why I was glad that we had regular deadlines throughout the year as it gives you something more immediate to work to – May feels like a long way away until halfway through April! It also kept me in a uni frame of mind, which meant that it was less of a shock coming back for our full-on final year in Southampton.