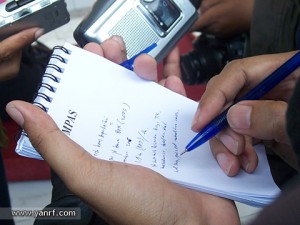 The techniques described below are based largely on James P. Spradley’s The Ethnographic Interview. This type of interviewing is particularly “kind” to interviewees, respects their rights, and attempts to see the world as they see it.

The aim of the interview is to get the informant to respond as fully and as freely as possible.  Let them do the talking so that you can learn from them, through their language, about their concepts and experiences. This means:

Skills in explaining and eliciting

The interviewer has to be able to initiate the interview and ask appropriate questions.

Stating explicit purpose. Throughout the interview, and particularly in subsequent interviews, the informant may need to be reminded of the purpose of the interview.

Explaining. Very often the informant will be more responsive if he/she fully appreciates what the interviewer is doing at each stage of the conversation.  There are two basic types of explanations:

Always avoid questions with ‘Yes’ or ‘No’ answers, or which have assumptions built into them, e.g. ‘Is it difficult to get a job in X factory?’ Use instead the following kinds of questions (in this instance the ethnographer wants to find out what it is like to be a worker in a particular factory):

Listening and Responding in Interviewing

The interviewer has an even more important function – to respond.  These skills will include the following:

Listening. The best way of listening is ensure that the interview is not routine and predictable (start from ignorance). If the informant is given autonomy, he/she is bound to tell you things that are new, unfamiliar, expressed in a different way etc.  Creative listening is a constant process of picking up and building on what the speaker says.

Giving feedback. To encourage the informant to continue and give a friendly atmosphere, the interviewers need to:

Encouraging expansion and extension by…