Will Heard, who is about to embark on the Archaeological Computing Masters programme at the University of Southampton, has written a blog post summarising his time with us at Basing House this season. Will was working closely with Dom Barker, who headed up the survey of Basingstoke Common.

Will is an important member of our team and we are really appreciative of his volunteering to take part in both the 2013 and 2014 seasons.

Alongside the excavation at Basing House during the summer of 2014, a geophysical survey was carried out on the large area of land to the south known as the Basingstoke Common. Previous archaeological investigation on the Common has been quite piecemeal, and our survey aimed to compliment the excellent geophysical survey from 2013, carried out by Clare Allen, who was also associated with the Basing House Project. 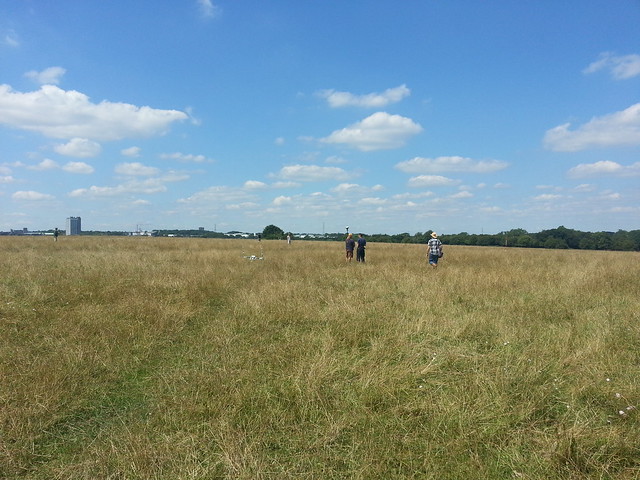 The common with Basingstoke in the background. Basing House is amongst the trees in the right of the picture.

The Common rises above the Old and New Houses to the south and is locally suspected to be the site of one or two of the four Parliamentarian siege camps that Oliver Cromwell set up during the siege of Basing House in 1644. Thus, the 2014 survey examined a gentle ridge rising above Basing House to the south. The land appears, with only cursory examination, to be well suited to such a camp.

The land slopes gently towards Basing House, which was quite desirable with the weapons of the day, whose projectiles dropped significantly over large distances. The ridge would also have protected a possible siege camp, accommodating hundreds or thousands of men, from retaliation from the Royalists in Basing House. In terms of wider connections, the land is directly next to the modern A30, which existed as the main London to Exeter road during the 17th century. Supplies and reinforcements could easily have travelled to a camp along this road. 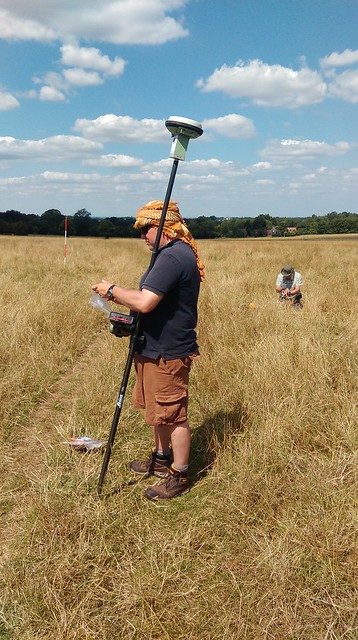 Dom using a highly accurate GPS device to set out our grids, so we did not wander astray.

Our survey used a gradiometer to measure minute differences in magnetic readings around the Common. Small variances in magnetic readings, when visualised on a computer, can reveal the presence of sub-surface features, like ditches, mounds or areas of debris. The survey systematically examined a large area of around eighty thousand square metres. The results are promising, revealing angular and round features, areas of intense activity and much more.

After a desk-based assessment of documents, maps and other sources, the interpretation of the results can begin properly. After that, we will truly be able to say whether or not we believe we have detected a Civil War camp, or if not, what we believe we have instead. 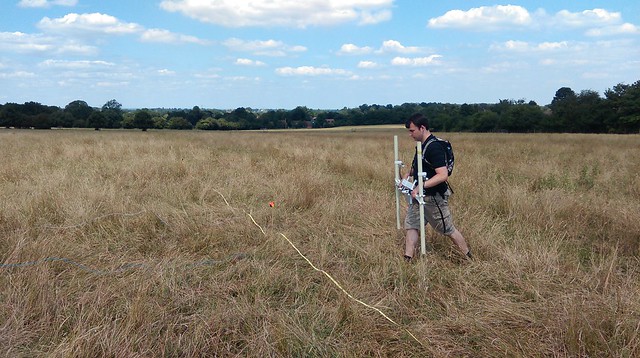 The survey was a success, with only a few mishaps thanks to metallic phones and belts affecting the magnetic readings. Thanks go to everybody that helped with the survey come rain or shine, whether using the magnetometer, moving guide lines, giving encouragement or providing makeshift non-metallic headgear in the driving British rain.

Special thanks to Dom who led the survey and Elliot, Peter, Tilly, Lucy, Roy and all the other conscripts. Depending on the interpretation of the results, more geophysics may be carried out on the Common next year, so keep an eye on the blog as time goes on!