Consider the Source: In Whose Interests, and How, of Big, Small and Other Data?   Exploring data science through wellth scenarios. 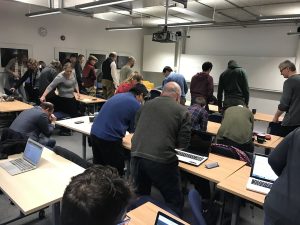 On Wednesday morning, Tom Rowledge and I had the invitation extended to us to attend a seminar on Data Science, held by the Web Science Institute. We attended in our role as DigiChamps, offering Live-Tweeting support, but we were also excited to hear m.c scharaefel speak on a topic we had heard nothing about before.

Excitement was not the only emotion, as we were also curious that there might have been a spelling mistake in the title, in the word “wellth”. However, all was quickly explained, and it became apparent that the spelling was most definitely intended.

In m.c’s own words, it was a “slightly random” talk, but one which covered a lot of interesting material and specific examples. The talk centered around the idea that we currently do not live optimized or ideal lives. m.c spoke about using Big Data to analyse patterns of behavior with a view to “making our normal better”. While she used several specific examples and you can find these in the Storify below, the best example for me was around posture, and how working in a more open posture can make you feel so much better. To test this, m.c asked the audience to crouch down into an almost fetal position, and shout, and then to jump up, opening their bodies and shouting again. Then she asked simply “which felt better?”. By this stage in the talk, the answer was obvious.

The underlying message was that technologies such as FitBit do not promote a massively healthy life, and instead fit into the less-than-brilliant normal we find ourselves in. Instead of encouraging us to count, we need to start making improvements from our mind first, by treating our bodies well and getting to know them.

Perhaps we finished the seminar with more questions than answers, but I think I can speak for everyone by saying they were given food for thought (but green food, not processed food!). I for one have been introduced to yet another area where Big Data could be powerful, and have also been given a different lens through which to look at my interactions with technology.

These reflections lead nicely onto my thoughts on my role in the University. It is a massive privilege to be able to attend events such as this, and it gives me an appreciation as to the leading research intensive work that is going on often just doors down from my lectures. I hope to be able to continue working at these events, and will continue to follow the work of the Web Science Institute and academics across the wider University.

Find the Storify of the talk here.