2018 has been a busy year for everyone. Pulse events and activities have influenced all corners of the University and across Hampshire. Being Chair has been a true delight, meeting and getting to know you and what makes you unique. However, due to recent changes, from Friday 12th October I will no longer be Chair of Pulse.

To ensure that we continue maximising impact and making change happen, I’d like to invite expressions of interest for Chair. Full Terms of Reference outlining the role(s) are available here: http://generic.wordpress.soton.ac.uk/lgbtpulse/pulse-terms-of-reference/and if you’d like to know more then get in touch. Please send your expressions to myself and Aysha Rahman (s.a.rahman@soton.ac.uk) by Monday 8th October.

This is an exciting network, with many more opportunities to grow and strengthen the University in the coming years. If you’re looking for the vehicle to open up your professional networks inside and outside the University, provide a platform for discussion, and enable you to meet people who will benefit from our mission, then this is the role for you.

For the third year running, Pulse is proudly taking part in Southampton Pride on Saturday 25th August. Southampton Pride is a celebration of who we are, joining organisations across the city in demonstrating our public commitment to LGBT+ equality and inclusion.

We welcome all colleagues and friends, no matter gender identity or sexuality, to join us for the parade under the University banner. The Community Parade will meet in Commercial Road at 1.30pm (near the Southampton Library entrance), with the parade starting at 2pm. The parade heads around Guildhall Square and down Above Bar Street to the Bargate and back again.

So that we have a clear idea on numbers, please click on the link below to let us know you’ll be joining us in the parade:

Southampton Pride is a huge event growing year-on-year, with festivities beginning on West Marlands Road (outside the Stage Door) from 11am going on until late. There will be a number of activities, attractions and stalls. Live music begins from midday and the celebrations continue through to the official after party at the Edge & Box Bar.

We look forward to seeing you on the day, even if you aren’t able to join us in the parade.

In February during LGBT History month, Pulse began the campaign to promote rainbow lanyards across UoS. The lanyards are a symbol of solidarity, where any member of staff can show their support for the LGBT+ community and help build an inclusive place at Southampton. I’ve been delighted with the response and feedback over the past few months, where demand now outstrips supply.

The influence of the rainbow lanyards at the University has been far reaching. Whole teams have requested lanyards, prospective students and their parents ask about LGBT activities and events at Open Day, and elsewhere the increased visibility has been the catalyst to having open and honest conversations about how we support and accept each other. Here is some feedback received a few days ago, which I’m able to share with you:

“On Friday 22/6/18 I was at a school in Andover giving a talk to Year 10 pupils about Engineering as part of their careers day. I was wearing my Pulse lanyard as I generally do at external events (and internally as well of course!) – and also I know that the majority of our Outreach team do as well. After my talk one of the pupils came to speak to me to say she found the talk really interesting – but also that she really liked my lanyard and that she thought it was particularly cool as she is gay – which I thought was really lovely! I told her that it was a really simple but successful campaign at the university that had genuinely changed the atmosphere there in a very positive way! Anyway, I just thought you’d like to know that your wonderful campaign is having a really positive impact, both within the university and beyond!”

So keep wearing your rainbow lanyard with Pride; it makes a difference to more people than we may realise. In the mean time, we’re requesting budget for further stock so watch this space for when supply becomes available.

If you’ve got any other feedback or stories to share across the network, then let me know. Also, if you’ve got ideas for future campaigns then get in touch – this is your Pulse network.

Every 3 months we hold a seasonal network breakfast. The next breakfast of 2018 is taking place on 13th June, at the Staff Club on Highfield from 8am.

Come along and meet other network members – you can bring your own breakfast or purchase a cooked one on site. Hopefully see you there!

Today is International Day Against Homophobia, Transphobia and Biphobia created in 2004 to draw the attention of policymakers, opinion leaders, social movements, the public and the media to the violence and discrimination experienced by LGBTI people internationally.

To celebrate this event, ECS and Pulse are collaborating by hosting stands in both B32 and B53 with a number of activities, posters, banners, things to take away, and treats!

Come along to B32 or B53, between 10am and 3pm to find out what you can do to help build an inclusive University environment.

You’ll have the opportunity to speak to members of ECS and Pulse about how critical it is to raise awareness of transphobia, biphobia and homophobia. We’ll see you in B53 or B32 later today, and we’ll also be tweeting/posting on social media so you can retweet and share to raise awareness.

Check out our latest article on SUSSED today about non-binary and gender fluid identities:

What is non-binary gender? #UoSrespect

In the spirit of the article we urge you to add your preferred pronouns to your email signatures. If you have ideas/activities which can help further raise awareness then get in touch.

The University of Winchester Martial Rose Library is organising a Human Library event on 15th May from 10am to 4pm, and is on the look out for more Human Book titles. Some of you will be familiar with the format as Solent University has previously hosted an event. In a nutshell, as with any other library, it aims to connect readers with books; the only difference is that ‘books’ are real people, and ‘reading’ is as conversation. A reader select from a list of available titles and then engages in an honest conversation, and previous titles include ‘Unemployed’, ‘Homeless’, ‘Transgender Woman’, ‘Refugee’, ‘Bisexual Christian’, and more.

For more information on the history of the format and previous books can be found on the University of Winchester’s blog post here: http://uniwinlibrary.wordpress.com/2017/03/17/8-human-books-26-readers-11-hours-of-life-changing-conversations/. Last year the feedback from ‘Human Books’ was amazing, they all thoroughly enjoyed it and most of them will be participating again this year. Olena who is organising the event, is constantly on the look out for new Human Book titles.

If you’re interested in coming to Winchester and being a book for the day, please get in contact with Olena via: 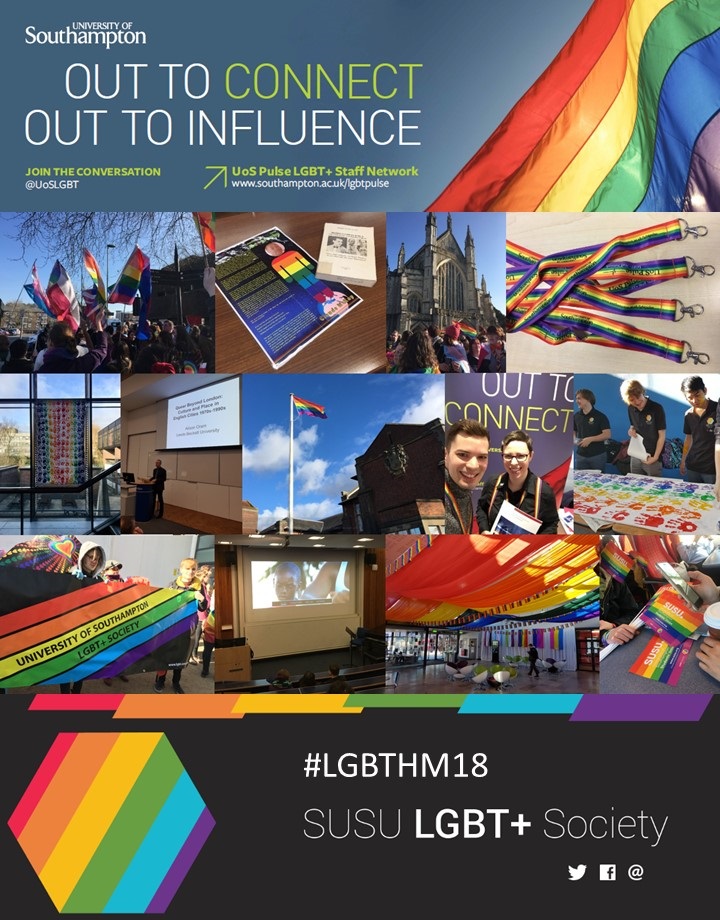 If you attended Hampshire Pride this year in Winchester, you will have spotted the Pulse Network in the parade! You might have even seen the discussion on Twitter during the day. For more information about what we saw at Hampshire Pride, check out our updated webpage with photos.

Join your network colleagues for Hampshire Pride 2018! The parade this year will start at the Winchester School of Art, with people who wish to be in the parade meeting from 1pm at WSA. The parade will kick off at 2pm and finish at the Indoor Street Festival at the market stalls on EII Court. We will be joining the SUSU LGBT+ Society, as well as the rest of the local community.

Although the event is free we’d like to have an idea of numbers, so if you’re coming along then please click on the link and register: https://www.eventbrite.co.uk/e/hampshire-pride-parade-tickets-43087917120

Hopefully see you on the day!